Why Fish Must See The Water

Men are like fish in water. Many of us work in organizations that mirror and value the often unconscious behavioral norms we have been trained and rewarded to emulate.

We know the operating rules without ever having to read the instruction manual. For many U.S. born men, our gender conditioning teaches and rewards us to go it alone; not ask for help; suppress emotion (except anger or frustration); advocate instead of inquire; avoid deep reflection in lieu of acting quickly to fix problems; and, most important, to work hard and sacrifice. The hard work for men is noticing (and acknowledging) that we have a distinct culture that is often the dominant one in most organizations and that culture impacts everyone’s behavior.

Like fish who never have to leave the fishbowl, we don’t see our own culture. We are surrounded by it, especially at work. We act as individuals believing we aren’t influenced by any group. Many men further resist the notion that they are beholden to any group. These male-associated behaviors become the organization’s norms, especially for leaders. 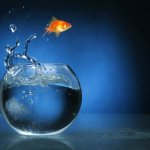 They are the criteria by which we hire, assess and promote everyone (men and women). We tend to hire and promote those who share similar behaviors and traits, thus reinforcing the norm (these male-associated behaviors). Many women, especially in management, face the dilemma of having to outperform men with these gender-conditioned behaviors.

When they exhibit these male-oriented behaviors, they may face ridicule and derision. It can be a daunting lose-lose proposition for many women and contributes to their fatigue from having to work hard to constantly prove that they are competent, capable and credible as leaders and individual contributors.  When one woman doesn’t make it in a visible, high-level position, it can impact all other women, especially women in positions where they are “the only” or “one of a few.” When a man doesn’t make it, it is just assumed he couldn’t cut it.  It does not reflect back onto other men. All in all, it can make for some pretty marginal work partnerships while fueling stress and fatigue, particularly for women, and backlash and resentment for men. There has to be more shared partnership efforts if we really want to make progress creating work cultures that value and respect all contributors and work styles. Men must work to better challenge and engage other men and help them see how the “water” affects their behavior and impacts access, engagement and motivation at work. Extract from MARC blog, April, 2012