Vanity Fair called Emma Watson’s UN speech on September 20th game-changing. For the UN it was a first-of-its-kind initiative that focused on mobilizing men and boys as advocates for gender equality.

She noted that feminism has become unpopular and challenged the notion that it is about man hating. Feminism, as she defined, is about supporting equal rights and equal opportunity for both men and women.

Stepping outside the norm of gender always being focused on women, Watson called out the notion of men being imprisoned by gender stereotypes, and that their freedom will lead to change for women as a natural consequence. Some of these prison walls are the traditional messages to men that vulnerability and emotion are weaknesses.

I once had three white male directors who went through a 3.5-day diversity learning lab together. They had their offices next to each other for 20 years, yet seemingly they never stepped out beyond their workplace rapport.
One afternoon one guy turns to the other and says, “You know, I never knew you went through that divorce until one day that picture disappeared from your desk.” The second guy swallowed hard and then responded, “That was the most painful think I’ve ever dealt with in my life and I never told another man at work.” 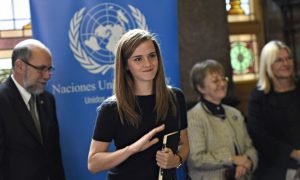 Meanwhile, the third guy was in tears. And when he can finally speak several minutes later he says, “I’ve been treated for clinical depression the past two years. I’ve never told another soul, let alone another man at work. I was afraid you wouldn’t think I was ready for that next promotion.”
These men had worked next to each other for 20 years and never saw each other as a potential source of support. They ended up talking to each other during the next four-hour break. Nonstop. Free from walls of separation they forged new support systems in their lives.

Men can transcend our rugged individualism, and find healthy support from other men. We can discover what psychologist Brene Brown asserts, “vulnerability is the purest form of courage”. Catalyst’s recent research identifies courage and humility as two key qualities of inclusive leaders.

Knowing how my life as a man is systemically different is another important quality of a male feminist. As one man once told me “I am realizing racism and sexism are not solely defined by action, but by lack of awareness of their systemic existence.”