When Partnering Across Difference, Men Must Bridge The Incredulity Gap

How to believe what seems impossible

From the reports of colleagues, clients, and friends, the following script—or one similar to it—occurs in the hearts and minds of women, people of color, LGBTQ folks, and other minorities far more often than some may realize:

I work with you, and I’d like to trust you, but I don’t know if I can. I watch you to see where you stand, like in meetings or when you are making casual conversations with other people from your group, and by “your group,” I mean white guys. You’ve done a few things that subtly hint to me that you know you and I are different, that you don’t judge me or think less of me because of that difference, and that you might actually be aware that prejudice and bias exists, even in you.

I know, this is my problem, not yours or anyone else’s. It’s up to me to figure out if I can trust you, and I will.  The time will come and I’ll see an opening to share vulnerability with you, and depending on how you respond to what I say, I’ll know where you stand and whether we can be real colleagues at work. Telling you about all the things that go through my mind and how I learn to trust you may seem odd, but for me, its an important job skill called “noticing.” I notice if your interactions with me flow or are stilted and self-conscious. I notice who you associate with. I notice if you interrupt something negative or ignorant that one of your group members says. Even though it doesn’t seem fair to you, I even notice your politics. I practice noticing on an hourly, even minute-by-minute basis, gathering data to determine how safe it might be to let my guard down with you.

If you’re not someone who understands what its like to be me, it’s helpful for me to know it so I don’t accidentally depend on you in that way. And if your hidden beliefs are that you disapprove of people like me, I want to know that, too, so I can protect myself in case you try to harm me professionally or physically.

By contrast, members of the dominant group—my group—rarely notice our own group-ness. We prove that we don’t see it when we make comments like, “Why do you people (anyone from a non-dominant group) always look at things as if it has to do with race, or gender, or sexual orientation? We’re all just people, aren’t we?”

White culture celebrates individualism, so many of us were raised to think like individuals, not members of any group other than our families. It follows that we would see mentioning group membership as outside of the normal. When others mention their group identity, they risk being accused of promoting their own self-interest, as in, “You just think that way because you are a woman.”

Now imagine for a second that a person who actually owns the above script takes that vulnerable step to say something “real” to you about what they think or where they stand. If the person is a woman she might mention something about how awkward it feels to be the only woman on the team. If the person were out and LGBTQ, he might mention his romantic partner, or how excluded he feels from some social or informal groups that exist at work. If the person is a person of color, she might mention how she notices no one on the whole senior team looks like her. Whatever the statement, these people have taken the initiative to be vulnerable and say what’s true for them, and now it’s your move. Do you validate what they are noticing or feeling even if what they are saying seems incredible, or do you suggest they are being overly sensitive and tell them to toughen up?

I’ve had that choice, and if you’re a white, hetero man who works with at least some people who are different than you, you have likely had this choice, too. What I’ve learned over time is this:

Testing the Rope
I grew up rock climbing, and early in my experience I was taught to test how solidly the rope was anchored to the cliff before needing to actually rely on it. It’s a way of checking to see if the anchors that are holding the rope are solid when I put my full weight on them. 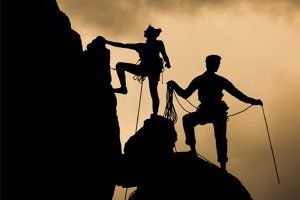 What’s happening here is the same sort of test; before opening up to talk about how they feel about something sensitive or important to them at work, members of a non-dominant group may decide to test the rope, you, to see what might happen if they rely on you. It’s not a bad test; it’s a smart one. The difference is, many white people don’t even know the rope is being tested. Worse, they may know they’re being tested and resent it as if it’s not fair. From their dominant group perspective, they forget that the person they are talking to doesn’t get the same automatic credibility or acceptance that they get, so they answer as if they were talking to another white person. They’re not.

Robin Gerald is a friend, a trusted colleague, and consultant. We occasionally work together with leaders who are learning about building better partnerships with people who are different than they are. Robin is a Black woman, and she lives outside of Atlanta.

Instead of making another compilation of comments I’ve heard, I asked Robin about her experience working with people who don’t believe her when she tests the rope. She responded to my email in a matter of hours, as if she didn’t have to consider what I was asking, she already knew because she runs the “test” all the time.

Two people can participate in the same event and have two completely different experiences, especially if they come from different groups. It happens all the time. If you’re a member of the dominant group, what’s it going to cost you to believe what seems unbelievable, at least until you’ve heard the other person’s story or tried to imagine walking in their shoes?